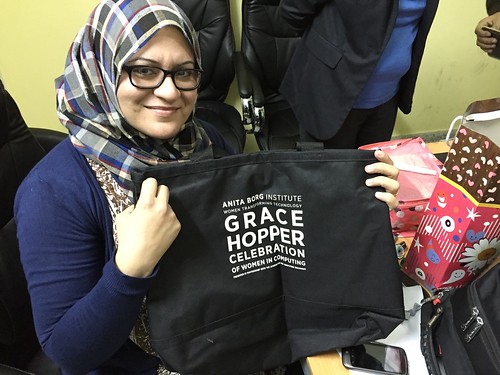 More topics are being developed.  This resource was created as a result of discussions on 12 February 2016 during the TechWomen Jordan Delegation’s Unconference at the Dead Sea.  The session I lead was called “Supporting TechWomen Fellows in Conflict Zones”. A group of nine TechWomen Fellows, Mentors, and supporters from the Middle East and USA started by discussing how to support TechWomen Fellows in conflict zones – especially Gaza, Yemen, and Libya – but we soon expanded our scope to consider those stuck at home because of severe family illness or other care taking responsibilities.  That is, these are ideas / resources / programs to benefit TechWomen Mentors and Fellows who are stuck in place.  This was not about getting them out but rather helping them remain professionally active where they are.  The five categories in which we felt that support could be offered / maintained and would be most helpful are:

The top photo shows my 2014 TechWomen mentee, Mai Temraz, with her Grace Hopper Conference bag and gifts in Gaza City, in February 2016.  We carried these gifts to her because she could attend the October 2015 GHC15 conference in-person to accept her award as 2015 Change Agent ABIE.  Being stuck in place is part of life in Gaza City.  Remarkable technical leaders like Mai are the inspiration for the TechWomen Alumnae Resources web page.