How to Display Stones in Earthquake Country 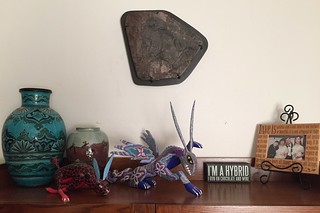 Displaying stones can be a challenge, especially in California where we regularly have earthquakes. If you are lucky, a decorative stone will come with a suitable base. Or, if the stone is small, a store-bought plastic stand may work. However, for large, heavy stones custom design and fabrication are needed for the best presentation. If you are handy like my husband John, you can make stands and pedestals yourself.

Here is what we are avoiding. This is a large cloisonné metalwork vase John and I bought in China which was flattened in an earthquake when it fell to the floor: 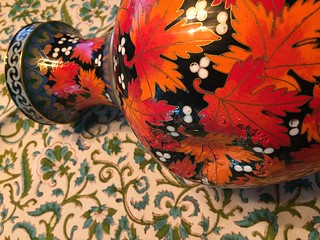 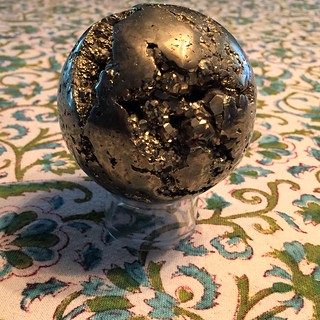 Basic hoop: My son Paul gave me this pretty iron pyrite (fool’s gold) sphere along with a clear plastic hoop for a stand.  The hoop keeps the sphere from rolling but it is only held in place by gravity. In an earthquake, this heavy sphere will probably smash something. 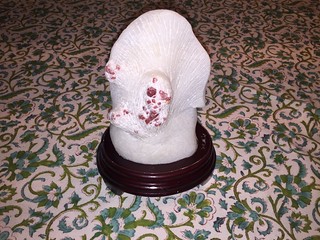 Simple pedestal: John brought this rock to Paul as a present from China some years ago.  It is ruby crystals on quartz, on a custom pedestal. The quartz has been carved away from the crystals to show them off. You can see in the photo below that the pedestal it came with has a trough or fitted hole carved into it the exact size and shape of the stone. 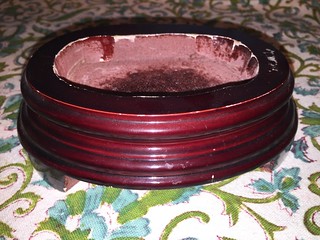 Large fitted pedestal: I carried home this Shona sculpture of carved serpentine for John when I was in Zimbabwe with the 2016 TechWomen Delegation. I asked the sculptor, Martin Chirenda, to sign it before before wrapping. The sculpture weighs over sixty pounds and is top-heavy. We were concerned that it would break or hurt someone falling over in an earthquake. John made a low oak pedestal by carving a trough and then filling it with epoxy to fit the stone exactly. The stone is fixed to the dried epoxy with a thin pour of Karo (corn sugar syrup). Using Karo is a museum display trick that does not damage the art but keeps it firmly attached to its base. 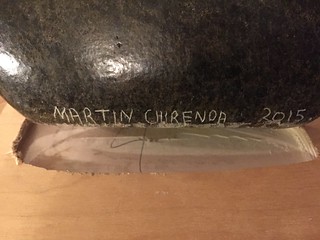 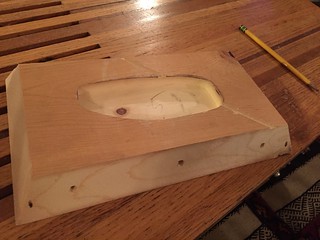 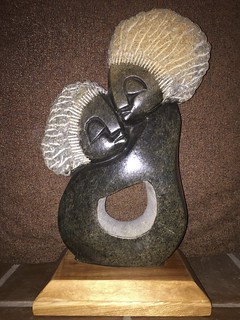 Mounted on a Plaque: We bought this ancient double Sea Lily or Crinoid fossil at Consolidated Rock & Mineral in Vacaville for our anniversary. It was found in Morocco originally. The stone is heavy but the fossil itself is fragile. We wanted to display it so that it could be admired but not broken. John just finished making this wood plaque with hooks. The plaque is mounted to the wall with a French cleat.  These are the best flowers John has ever bought me! 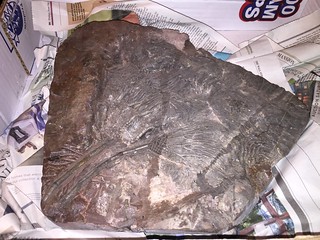 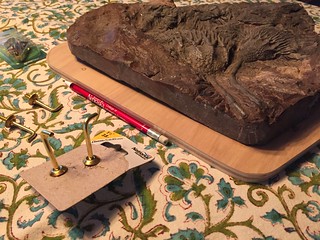 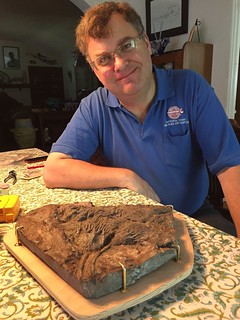 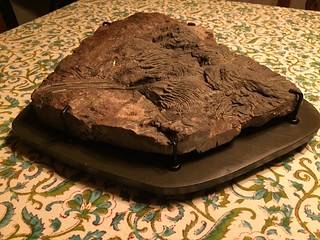 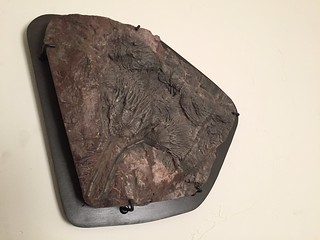 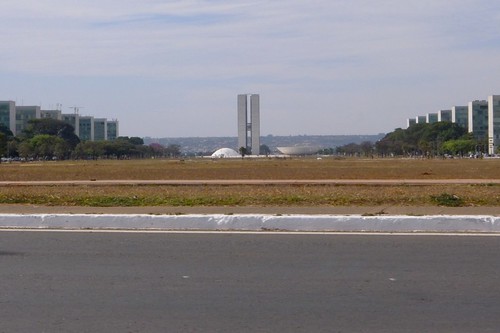 Besides being new cities, Brasilia and Shenzhen have in common that their quick creation is associated with a great leader. I was last in Shenzhen in 2010, the 30th anniversary of the Shenzhen Special Economic Zone. During that time, there was much honoring of Deng Xiaoping. Deng lead China 1978-1992. In Brasilia, we stayed at the Kubitschek Plaza hotel – whose name honors Juscelino Kubitschek de Oliveira, Brazil’s President 1956-1961.

Both Brasilia and Shenzhen are still in a skeletal stage of civic development. That is, I saw big buildings and well-developed districts like good bones providing form and identity but also large areas of open land that were marked with actual or virtual/mental “Under Development” signs.

My son and son-in-law like to play the virtual land development game Minecraft together. Minecraft in multi-player survival mode has the concept of identification/ownership “waypoints” to mark areas someone plans to build on – even if nothing is there now. I think Brasilia and Shenzhen are full of waypoints where development is under long-term consideration. It will be fascinating to watch the flesh of mature cities grow up over the coming decades around their lovely young bones. 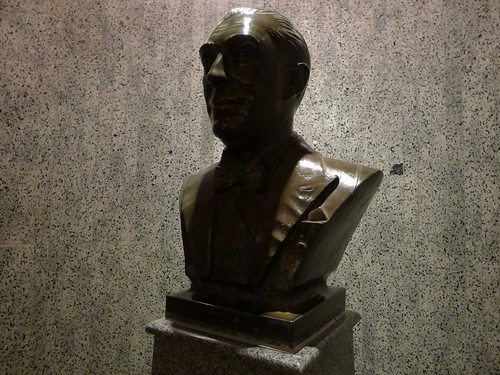 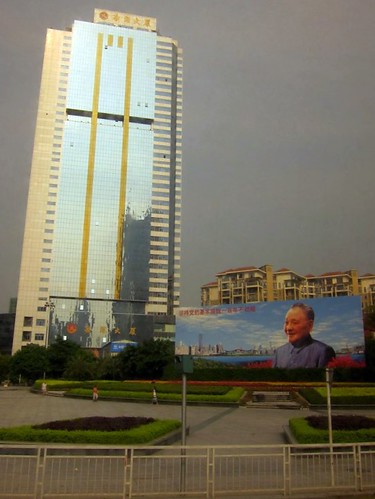 Almost my whole Futurewei “Enterprise Global Competency Center” Operations group was laid off yesterday, effective next week. I am leaving Huawei Technologies after 2-1/2 years. It has been interesting working in the Silicon Valley for a company based in China. The first time I was called a “foreign expert” it was a shock – since I was within 50 miles of my birthplace and the person speaking was about 10,000 miles from his hometown. I have learned a great deal about China and Chinese culture – both good and bad – and I will miss many of my soon-to-be-former co-workers.

I look forward to my next professional adventure. Please keep track of me on LinkedIn and on this blog.

I am very proud today! My husband John Plocher and his development team won Futurewei Technologies’ 2012 Most Valuable Innovation Project Award for their Cloud Storage project. John’s boss, Jim Hughes, is traveling in China so John (the Software Architect) made the acceptance speech at today’s big event.  The team will split the award bonus.

Today was the last day at Huawei in Santa Clara for the three TechWomen mentees during their visit to the Silicon Valley.  There are still some San Francisco Bay Area events before they travel to the the Grace Hopper Celebration and then the US State Department in Washington DC next week.  The Huawei team held a lunch and gave each of our emerging leaders a certificate signed by Futurewei President, Guolin Wang, and by the TechWoman’s mentor or mentors.  I was also treated to a surprise birthday party this morning and Huawei held its annual Moon Cake and Chinese harvest festival party this afternoon.  A busy day!

The Huawei TechWomen mentors and mentees gathered in my home for a potluck dinner tonight. My husband made a halal chicken curry with rice as the entree.  There were women from at least seven countries around our table: China, Egypt, India, Iran, Lebanon, Morocco, and the USA. The guests had fun visiting my office in WP668, our backyard caboose. The food was interesting, plentiful, and delicious. My mother and husband joined the party.  What a delightful group of new friends!

Filed under Caboose Project and Other Trains, Home & Family, Mentoring & Other Business