John Plocher and I are in the process of fixing up our 90-year-old Spanish Mission style home in Willow Glen (San Jose, California). One of the duties of homeownership is maintenance, particularly fixing what does not show. We just completed Phase One of a maintenance project, including adding new French drains to redirect water away from the house, repairing some rocky tiles on the side porch, replacing a front porch post, adding better support for the ground floor so that the front door opens all the way, and replacing a walkway-with-a-step with a ramp. This work will not meet the realtors’ goal of “increasing the value of your home” for resale, but since this is our family’s forever home, it is enough that the work increases its comfort and value to us. We got virtual tours of the ongoing work under the house using FaceTime.

Some of maintenance challenges come from ours being an old (if well-built) house, and others from the land being part of the original Willow Glen swamp of the Guadalupe River. The ground shifts annually with seasonal moisture changes, causing stucco cracks and sometimes making doors stick. The most unhappy person with the construction has been Princess, our porch cat, who resented the disruption of her royal domain. Phase Two is being planned now!

If you want to receive Katysblog posts by email, please sign up using the Sign Me Up! button (upper right on Katysblog home). Images Copyright 2022 by Katy Dickinson.

We have four old family clocks, two of which work and one of which chimes. The sound of the two ticks and the chimes fills our downstairs with small comforting noises, even when everyone is silently interacting with their computing devices. The clocks keep time but not with each other. It is somewhat like how Terry Pratchett describes the clocks in his fictional city of Ankh-Morpork on the Discworld,

“Noon in Ankh-Morpork took some time, since twelve o’clock was established by consensus. Generally, the first bell to start was that one in the Teachers’ Guild, in response to the universal prayers of its members. Then the water clock on the Temple of Small Gods would trigger the big bronze gong. The black bell in the Temple of Fate struck once, unexpectedly, but by then the silver pedal-driven carillon in the Fools’ Guild would be tinkling, the gongs, bells and chimes of all the Guilds and temples would be in full swing, and it was impossible to tell them apart, except for the tongueless and magical octiron bell of Old Tom in the Unseen University clock tower, whose twelve measured silences temporarily overruled the din. And finally, several strokes behind all the others, was the bell of the Assassin’s Guild, which was always last.” (Terry Pratchett, Men at Arms, 1993).

The Junghans chiming mantle clock was a wedding present in 2000 from John’s parents. It was purchased by John’s great-grandfather Johannes Plocher in Holzhauzen, Germany. Joannes and his wife Anna gave it to their son (John’s grandfather), Karl on his wedding Adelia, in 1930. I love the art deco design on the clockworks inside the case.

I bought the Gilbert wall clock in 2008 as a birthday present for John. The clock itself is from about 1915. The Western Pacific glass is not original but is one of the reasons we like it, since we own WP668, a Western Pacific caboose. John winds up his Junghans and Gilbert clocks every week.

The two clocks which have stopped working are from my family. One is a gilt metal Rococo style clock that my father’s mother, Gladys Grace Oakes Dickinson, loved. The other is an ornate horseman clock that my mother, Eleanor Creekmore Dickinson, had since I was young. Surprisingly, even though they are from different parts of my family, both were made by the New Haven Clock Company, probably over a hundred years ago.

Update: I have been looking for more information about the New Haven Clock with the ornate warrior horseman figure. I found that a version of this clock with the exact same horse but no rider is relatively common. All of the versions I have found on the web have a top piece above the clock that is missing on ours. Sometimes the horse is on the right and sometimes on the left of the clock on the pedestal. I still have not found an exact match. My Aunt Louise Creekmore Senatore read my blog and wrote that her father (my grandfather), Robert Elmond Creekmore, was once its owner in Knoxville, Tennessee, “the Ornate Horseman clock was on my Dad’s bureau for years when I was a child. It traveled with us to Windgate (1964), stayed on his bureau, and Eleanor asked Mom for it when Dad passed away (1976).”

I found this tiny, blurry thumbnail photo on the web of a gilded variant of our clock but it is on a dead website. Still hunting for more information!

(None of these clocks is for sale – please do not ask.)

If you want to receive Katysblog posts by email, please sign up using the Sign Me Up! button (upper right on Katysblog home). Images Copyright 2020 by Katy Dickinson.

My Willow Glen micro farm is thriving. I usually grow cactus, and herbs like fennel, rosemary, and sage. Since we are mostly staying home because of the Covid-19 pandemic, I am taking the opportunity to grow vegetables. I started this project in April by converting a section of our little orchard. The first fruits of my farming efforts are cherry tomatoes and delicata squash. Both indicate their readiness by a color change. The tomatoes shift from green to yellow to red. The delicata squash start white and develop green lines as they mature.  The tallest plants are sunflowers, which are currently competing with the apple tree for head room. I am expecting beans, peas, corn, and watermelon over time.

In 2012, we had a mouse infestation in our home, one of the potential downsides of pet birds. I was thinking of this when our book club read The Plague by Albert Camus  (in which the bubonic plague starts with rats). Plague and pestilence books have been popular during the Coronavirus pandemic, with book recommendations lists being widely published. We read sections of Camus’ 1947 book in last semester’s “God and Suffering” class at GTU‘s Dominican School of Philosophy & Theology (DSPT). Ironically, The Plague was part of the reading list for the class before Covid-19 came upon us. It seems to me that in the months since the pandemic started, we have slowly become like the people of Camus’ town of Oran in Algeria who, “in the very heart of the epidemic… maintained a saving indifference, which one was tempted to take for composure.”

He “…resolved to compile this chronicle, so that he should not be one of those who hold their peace but should bear witness in favor of those plague-stricken people; so that some memorial of the injustice and outrage done them might endure; and to state quite simply what we learn in a time of pestilence: that there are more things to admire in men than to despise.

None the less, he knew that the tale he had to tell could not be one of a final victory. It could be only the record of what had had to be done, and what assuredly would have to be done again in the never ending fight against terror and its relentless onslaughts, despite their personal afflictions, by all who, while unable to be saints but refusing to bow down to pestilences, strive their utmost to be healers.”

While our community has become less focused on the pandemic and has turned to other matters, I pray that we continue to honor and support the heroic doctors and health workers who are still fighting Covid-19.

Since it seems that Covid-19 will be with us for the foreseeable future, I bought a new sewing machine. Every time I wanted to make a face mask, or hem some pants, my old one would jam – even after having it repaired. So, John and I did some research and bought a Singer CG590 Commercial Grade Sewing Machine.

I used it yesterday to make four more face masks and hem two pairs of pants. It works very well – even sewing through several layers of denim. I decided I did not need any fancy stitches because in twenty years I never used those features on my old machine. (How many times do you really need to embroider ducks?) Straight, zigzag, and button hole are enough for me. Other than wanting the person who created the threading instructions to go to remedial art school, I am happy with my purchase! It is very similar to the machines I used in my high school sewing class – sturdy, simple, and heavy.

Five years ago, I redesigned our front garden for water conservation. Partly as a result of my recent experience with a Pacific School of Religion class project helping to plant a food garden for The Village curbside community, aka homeless encampment, in Oakland, I was inspired to replant some of my own garden in Willow Glen (San Jose, California). John Plocher and I had to reroute the watering lines. I also had to remove couch and Bermuda grass volunteers, and relocate the many big pink worms that get mixed up in the work.

What I have now includes more California natives, which I hope will handle San Jose’s increasingly hot summers better.* New additions are in bold:

On 9 February, I took out three of the lantana and replaced them with low-growing manzanita, which is a California native that I hope will be less bushy and aggressive. There are still two of the lantana, much pruned back. 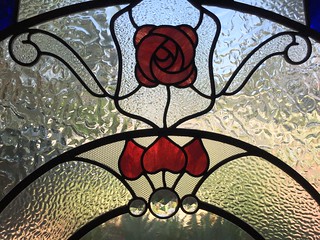 Lighting a big stained glass panel is tricky. You want the light to be warm and even across the surface to show off the colors and and patterns. Museums like The Richard H. Driehaus Gallery of Stained Glass at Chicago’s Navy Pier feature custom light boxes to present their masterpieces. Those of us with stained glass built into our homes as windows need another solution that addresses inside/outside light and darkness.  The glass should look good from both inside and out: a gift to the street.

Our architectural stained glass was created by Vince Taylor, starting in 2004 with a big panel in the dining room plus a smaller panel in our front door. In addition to being lovely, the panels provide privacy from the street and help reduce the heat and glare from direct sunlight on the hottest side of the house.

John tried lighting the big panel in a variety of unsatisfactory ways until he settled on LED strips around the edge. These work the best of the options we have tried – providing a warm and inexpensive light source – but the strips become brittle in sunlight in about five years. Today, John replaced the set.

This is Vince Taylor checking up on the big panel in 2012: 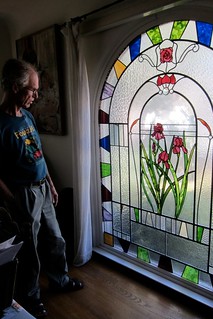 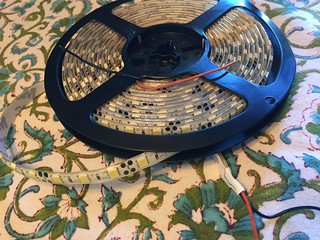 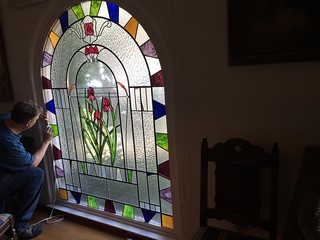 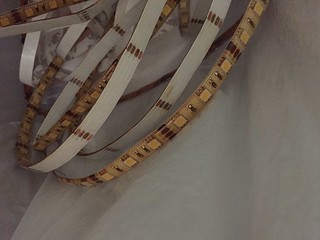 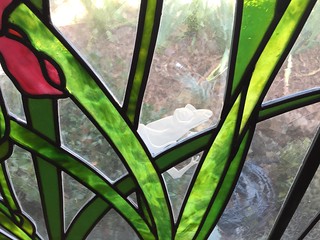 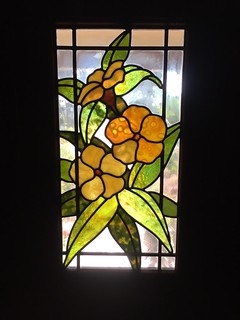 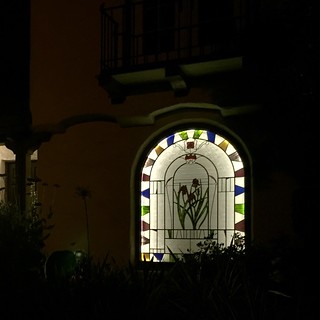