This is the third in a short series about my two week Spanish language and social justice immersion program in Cuernavaca, Mexico, with Pacific School of Religion‘s Center for LGBTQ and Gender Studies in Religion (CLGS) and CILAC Freire.

Costumbres y Tradiciones (customs and traditions) – One of our talks included the charming concept of Mexico’s own “Vitamin T” – tacos, tostadas, tamales, tortas, tlacoyos and, of course, tequila. In Dora’s kitchen, we happily ate a great deal of Vitamin T. One Dora’s oldest kitchen tools was her mother’s molcajete (mortar) and temolote (pestle) for grinding spices. We saw more modern molcajetes in the market, painted with dog and pig faces. Even when our group got up early for day trips to visit Tepotzotlán and Mexico City, Dora was always there to be sure we were well fed and cared for. On our last day, she took us on a special trip to the municipal market to buy flameware pots after we admired those she used so well.

Another part of the Costumbres y Tradiciones talk was about the Virgin of Guadalupe whose 1531 image was ubiquitous during our travels in Mexico. We learned that Guadalupe has a connection to Tonantzin, the Aztec mother goddess, and that many believe in the Virgin of Guadalupe who do not believe in Jesus Christ, or even God. I did not know until hearing this talk that there is an Arabic connection to Guadalupe: the name (probably) derives from that of a Spanish river, the name for which has Arabic roots. Since my house in San Jose, California, is on the Guadalupe River, I was very interested!

One of the lovely old churches we walked by every time we went to downtown Cuernavaca was Parroquia San José El Calvario which not only has a variety of images of the Virgin of Guadalupe inside but a special building for her statue on the street outside. In addition to the prominent outside image of Mary, inside San José El Calvario I found a saint I never heard of before, San Charbel Makhlouf – a Maronite monk of Lebanon. I found another statue of San Charbel in the Parroquia de la Asuncion, Sagrario Metropolitano, in Mexico City. In both churches, his image stood above collections of many colored satin ribbons. A Catholic friend from Michoacán told me that San Charbel is very popular and powerful and that each ribbon represents thanks for a healing. In 2013, during our visit to Lebanon, TechWomen Fellow Adla Chatila took my daughter Jessica and me to see the Cedars of Lebanon, Khalil Gibran‘s home, and the Mar Bishay Hermitage, Qozhaya. The Monastery of Qozhaya is close to where San Charbel is from. I was not expecting to see so many connections to the Middle East while in Mexico.

Solve24 from TechWomen of Lebanon

I am very proud of three of my TechWomen mentees from Lebanon who just launched the Solve24 – a new technical camp for teens in Beirut.  Our 2017 TechWomen Fellows from Lebanon (Lara Chikhani, Maya Itani, and Rasha Sukkarieh) have been working hard – with some advice from their three experienced mentors from the Silicon Valley (Mercedes Soria, Fatema Kothari, and me) for many months to create this new program – while working at regular jobs, of course.

A project-based program, designed to train students aged 13 – 17 to think outside the box while inquiring about and solving real-life challenges. The program allows them to explore design thinking processes and STEAM tools to find ways for creating usable and innovative products and finding solutions for real-life problems, in 24 hours, spread over 2 weeks. Throughout this camp, students will attend workshops and engage in specific activities that will guide and shape their way of thinking and provide them with the needed strategies for solving problems in an innovative way. First Session: 30 July – 9 August 2018

Lara, Maya, and Rasha are inspiring and remarkable and creative leaders!

If you want to receive Katysblog posts by email, please sign up using the Sign Me Up! button (upper right).
Images Copyright 2017-2018 by Katy Dickinson and TechWomen.

Crafts and Souvenirs from Egypt

During the TechWomen Delegation to Egypt there was very little time for shopping but I did manage to find some presents and souvenirs.  Before our Professional Development Sessions with Alwan wa Awtar – AWA – Youth in Cairo, we bought bags, necklaces, and scarves from a young woman who started an embroidery craft and sewing business with her mother.  We also stopped by a Carrefour on the way to a meeting, where I found an excellent selection of lovely cotton scarves – not surprising in a country where colorful and well-designed scarves are worn by so many women.

We had time on the day we left to walk through Muizz Street and the shops of the old city in Cairo.  I was pleased to purchase a large black shawl with Egyptian hand embroidery, and a Ramadan tablecloth in a colorful primary color pattern we had seen many times as we traveled.  I even found some alabaster lamps which will be appreciated as presents, plus a pair of silver earrings for myself.  Thanks to 2015 Fellow Doaa ElEraqy of Egypt who was our patient guide and negotiator in the souq.

In addition to these treasures I bought, we Mentors received many kind gifts from the TechWomen Fellows of Egypt. I was also touched and honored to be given souvenirs from Palestine and Lebanon – presents from TechWomen mentees.

If you want to receive Katysblog posts by email, please sign up using the Sign Me Up! button (upper right).
Photos Copyright 2018 by Katy Dickinson.

At the 37th Episcopal Diocese of El Camino Real annual convention last weekend, I was honored by Bishop Mary Grey-Reeves with a second Simple Servant Award for my work since 2010 with the TechWomen mentoring program of the US Department of State, Bureau of Educational and Cultural Affairs. The award certificate reads:

Simple Servant Award
Presented on November 3, 2017 to
Katy Dickinson
The Diocese of El Camino Real honors you. May God bless you for your
faithful ministry mentoring women in Africa and the Middle East in STEM
professions, and for your contribution to the creation of a “virtuous cycle” of
knowledge and wisdom sharing in the world of technology.

It has been an honor and pleasure to work with TechWomen and my mentees from Africa, the Middle East, and Central Asia. Watching this program thrive and touch so many lives is a great delight. Since I worked in 2010-2011 as the TechWomen Process Architect, I have been a volunteer with this life-changing program as a mentor, working with groups of STEM leaders who travel to the San Francisco Bay Area and Silicon Valley to be hosted by 122 science and technology companies and organizations for a month (and then continue a mentoring relationship once they have returned to their home country).

Beginning with the first cohort of 37 from 6 countries in 2011, there have been 518 TechWomen Fellows from 22 countries and 698 mentors. I have formally been assigned to mentor 14 women in Lebanon, Algeria, Gaza-Palestine, Jordan, and Tunisia – and have worked with many more who have asked me to be their mentor. I have also participated in nine formal TechWomen Delegations with the State Department, to: Jordan (twice), Kyrgyzstan, Morocco (twice), Rwanda, South Africa, Tunisia, and Zimbabwe, as well as making informal trips with TechWomen mentors to visit our mentees in Lebanon, Gaza-Palestine, and Sierra Leone.  Learning from my sister mentors as well as from my mentees is part of the joy and value of this excellent program for Citizen Diplomats.

Want to make a different in STEM? Please consider joining TechWomen as a mentor yourself!

If you want to receive Katysblog posts by email, please sign up using the Sign Me Up! button (upper right).
Photo Copyright 2017 by the Diocese of El Camino Real, Elrond Lawrence.

Creating a Pitch for Lebanon

As a TechWomen Impact Coach for 2017 Team Lebanon, I am honored to serve for my seventh year in this remarkable mentoring program of the U.S. Department of State’s Bureau of Educational and Cultural Affairs (ECA).  Our team includes five Emerging Leaders from Lebanon (Lara Chikhani, Layal Jebran, Maya Itani, Rana El Chemaitelly, and Rasha Sukkarieh), plus three experienced mentors from the Silicon Valley: Mercedes Soria (Knightscope), Fatema Kothari (Verizon, and the Internet Society) and me.  We have been working hard for weeks at three TechWomen workshops plus twice a week remote meetings to develop our pitch for presentation this Friday.  Team Lebanon’s project is called “Ask an Expert” – a social enterprise to benefit senior citizens and refugees.  Wish us luck!

If you want to receive Katysblog posts by email, please sign up using the Sign Me Up! button (upper right).
Images Copyright 2017 by Katy Dickinson

I am so glad to have been accepted as a TechWomen Impact Coach again – and to be working with the same great mentor team as last year! TechWomen is a mentoring program of the U.S. Department of State’s Bureau of Educational and Cultural Affairs (ECA).  I was the 2010-2011 Process Architect for TechWomen and have been proud to support the program as a professional volunteer each year since then.

Mercedes Soria (Vice President, Software Engineering, Knightscope), Fatema Kothari (Technical Project Manager, Verizon) and I had a delightful experience as 2016 Impact Coaches, working with TechWomen’s inspiring Team Tunisia. We are looking forward to meeting our new Emerging Leader team from Lebanon when they arrive in San Francisco in September.

I am proud of my daughter Jessica who has herself been accepted as a TechWomen Impact Coach this year – for TechWomen Emerging Leaders from Palestine. I have just been looking over pictures from when Jessica and I visited TechWomen mentees in Lebanon in 2013. I am excited to further expand my knowledge of the people and culture of this ancient and fascinating country.

If you want to receive Katysblog posts by email, please sign up using the Sign Me Up! button (upper right).
Images Copyright 2013 by Katy Dickinson 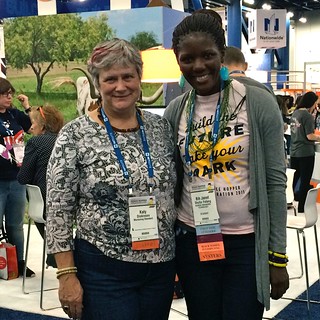 The TechWomen mentoring program participants often travel among our 21 countries in Africa, the Middle East, and Central Asia.   On our journeys, mentors and mentees often bring each other things, calling such deliveries “TechWomen Mail”. Sometimes the generous TechWomen carry local treats (like cookies or honey), or souvenirs from their country (like pen holders or coffee mugs).  Earlier this year, a traveling mentor bought a rug in the souq only to find it too big for her luggage.  In the next few months, I am sure that rug will arrive in the Silicon Valley with a visiting TechWoman. 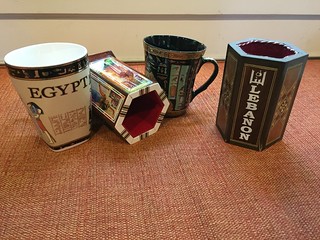 Since I would be seeing the Cameroon “Angels Tech of Africa” Technovation team in San Francisco, Janet Fofang (TechWomen 2013 Fellow) asked me to send her some electronics to use when teaching her Tassah Academy or WeTech girls in Yaounde, Cameroon. My husband, John Plocher, put together a box of interesting electronic boards and chips for exploration. Dorothée Danedjo Fouba  (TechWomen 2014 Fellow) kindly agreed to carry the box to Janet. I left the box loosely packed and openable so that Dorothée and customs inspectors could see what it contained – I am sure it looked odd on airport scanners.

This week, Janet wrote me that the box had arrived safely. (Thanks to Dorothée!) Janet and John are now in email discussions about what was in the box, and about software and hardware open source projects he has published on our family website, spcoast.com. We may have more TechWomen Mail headed to Cameroon soon! 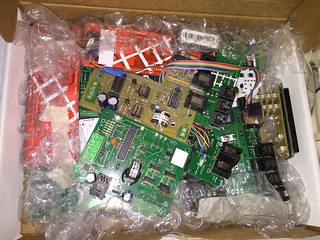 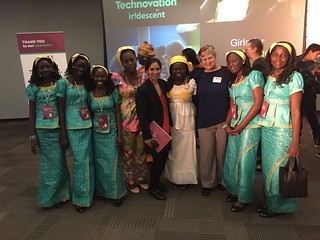