I visited the University of California at Berkeley campus today to buy a new Cal Alumni sticker for my flaming SmartCar. I am taking an intensive theological Spanish course this month at Graduate Theological Union next door. As I walked across campus, I remembered that last month was the 40th anniversary of my Cal graduation, so I visited some favorite spots, including Ludwig’s Fountain on Sproul Plaza. Is Cal the only major university with a fountain honoring a dog?

Last month, I finished revising and printing/binding 256 pages (in 17 sessions of Book One – “The Hebrew Bible“) for the pilot version of the new “The Transforming Literature of the Bible” (TLB) course. Today, I finished revising 140 pages in the first 9 sessions (out of 19) of TLB Book Two (“The New Testament“).  Production starts tomorrow.  I am collaborating on the revision of TLB with the Rev. Canon William H. Barnwell who wrote the original course. In addition to revising Canon William’s 2008 course materials, I am running a pilot version of the class itself at Elmwood Jail (Milpitas, California). I am grateful to my Co-Mentors Diane Lovelace, and my husband, John Plocher (with the Rev. Peggy Bryan as backup). This program is supported by the Correctional Institutions Chaplaincy  (CIC) and St. Andrew’s Episcopal Church.  Thanks to Collette Lynner of CIC for supporting TLB production.

Six students are finishing the 17 sessions in Book One this Friday.  We start studying Book Two next week.  The inmates are very enthusiastic, doing their extensive homework reading and participating energetically in in-class discussions and reflections.  There is a waiting list of inmates from two dorms to join us.

Literary selections are included in TLB to provide a diverse context in which to understand some of the major themes in the Bible passages under consideration.  In addition to readings in the Old Testament (Hebrew Bible), the students of Book One have also read:

The Book Two (New Testament) students will read these literary selections in Part One “A Journey With Mark“:

One of the TLB students wants me to start another Education for Ministry (EfM) seminar in their dorm after I finish Books One and Two of TLB. Joel Martinez and I are Co-Mentors for a weekly EfM seminar which started in 2015 in another dorm where inmates tend to stay inside longer. I designed TLB to be finished in 5 months but EfM takes four 9-month terms to complete. I told him that if he can find ten other students who will be there for long enough, I will start another EfM class.

Other than my ongoing project as the Mentor for the Shakespeare Reading Group, TLB is one of the few times since I was graduated from the University of California at Berkeley in English (with a specialty in Shakespeare) that my knowledge and passion for literature has been of such use.  I am very much enjoying reviewing potential TLB selections.  Thanks to my daughter Jessica Dickinson Goodman for her advice on some of the selections, and to John for reviewing my drafts.

If you want to receive Katysblog posts by email, please sign up using the Sign Me Up! button (upper right).
Image Copyright 2018 by Katy Dickinson.

I very much enjoyed being interviewed by Akshay Birla for his “Life of the Mind” podcast last month. He just published the interview as “Episode 19 | Katy Dickinson on Technology, Mentoring, and Religion”.

Katy Dickinson has been around the tech-block. Hired by Eric Schmidt at Sun Microsystems, she literally wrote the book on the software development lifecycle that Sun used for release of almost 10,000 releases. She is a technologist, entrepreneur, mentor, and writer.

In our conversation Katy talks about her work as a technologist on creating processes:
A process has to not assume that you have world-class people working on it. A process assumes that that not everybody — while they are good-intentioned and competent — [is] perfect. You have to have a system that allows for lack of perfection but can work if you have the best that there is.

and the futility of only having excellent coders:
A good coder is a wonderful thing to have but you have to create something that the customer wants and feels comfortable with. Good coding and user experience are sometimes at odds.

But we spend the most of our conversation talking about mentoring programs that deliver high return-on-investment, and the intersection of religion and technology.

On the importance of example and networking provided by the Grace Hopper Celebration:
While they may be the only women in the room – which has certainly been my experience in 30+ years in the Silicon Valley – there are a lot of rooms.

Listening to your own recorded voice is always surprising – it sounds so different from the inside! 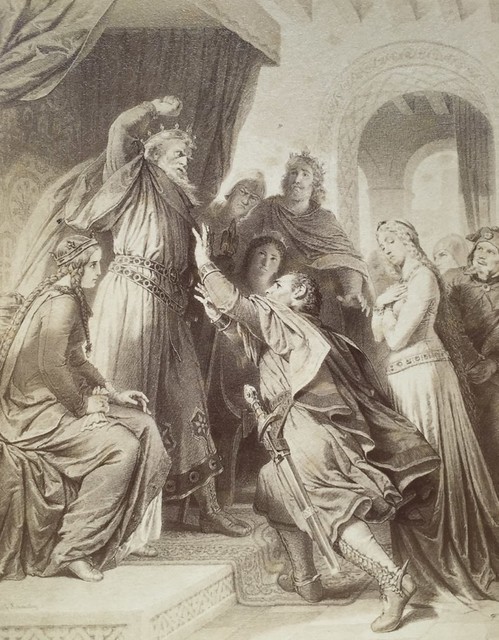 Our Shakespeare reading group met on Sunday to read his 1606 masterpiece King Lear aloud, and share a potluck meal in a local home.  I wrote my Honors Thesis at U.C. Berkeley on King Lear, so I felt very well prepared for this reading.  John Watson-Williams presented the part of Lear wonderfully, and I very much enjoyed reading both Cordelia and The Fool (as a doubled role).  We had fifteen readers in all to cover characters of the court and countryside.   It is delightful listening to good people enjoy developing nasty roles like Edmund the Bastard, Goneril, Regan, Duke Cornwall, and Oswald.

When I wrote my thesis as a university student, I understood the interaction between Lear and his daughters in a 21-year-old’s context. Now (a few years later), after my father passed on at 85 (about Lear’s age), and I am managing my 84-year-old mother’s affairs, I hear the play differently. I know Goneril to be greedy, vicious, and unfilial but her plea to her father in Act I, Scene IV rings true:

Come, sir,
I would you would make use of that good wisdom,
Whereof I know you are fraught; and put away
These dispositions, that of late transform you
From what you rightly are.

King Lear is part of my life: a play that is deep and broad and always fresh, offering new understanding with every reading.  The Shakespeare reading group is based at St. Andrew’s Episcopal Church (Saratoga, California) but we welcome readers from the community.  We meet every other month: next up is Richard II, in April.

I am inspired to write about my own recent experience with a private debt collector (a kind of collection agency) by today’s article “Locked Up for Being Poor – How private debt collectors contribute to a cycle of jail, unemployment, and poverty” by Jessica Pishko (in The Atlantic, 25 February 2015). While I was certainly not locked up, it did take over six months and many phone calls to resolve my recent copayment discussion with University of California – San Francisco Medical Center (UCSF). Remarkably, the collection agency is the hero of my story.

I wrote a blog last year “P-Phenylenediamine – Allergy to Hair Dye” in which I mentioned that I was being treated by the medically-excellent UCSF Dermatology Clinic. My debt discussions with UCSF Financial Services started because on my 2 June 2014 visit, the clinic receptionist did not ask for the regular copayment of $15. I sent in the $15 copay on 7 July 2014 as part of the regular UCSF billing cycle. Something went wrong because my payment was not recorded. UCSF kept billing me each month for $15. I phoned them a few times but figured it would sort itself out. By 5 December, when I was still being billed $15 a month for the 2 June copayment, I decided it was easier to pay $15 again than continue to call. Then, I got a letter dated 24 December from Transworld Systems – a collection agency – asking me to pay them the $15 owed to UCSF.

I called UCSF some more and even mailed a letter on 7 January 2015 to UCSF (including copies of both of my cancelled checks for $15) objecting to being asked to pay the $15 copayment for a third time. UCSF Financial Services staff kept telling me that they no record of either my payments or my letter and said I still owed $15.  Communications were made more difficult because UCSF only wanted to communicate by fax (not email or paper mail). I send a fax maybe once a year.  However, I re-sent the letter by fax.  UCSF Financial Services still said they did not receive it. 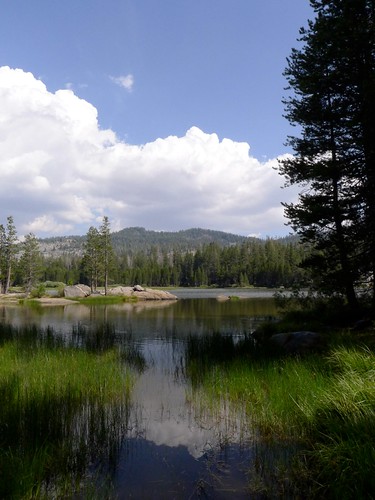 I recently caught this lovely image of clouds among the shore grass in the Herring Creek Reservoir. We saw the lake during a family hike in the Stanislaus National Forest while at the University of California’s Lair of the Golden Bear Camp Blue. 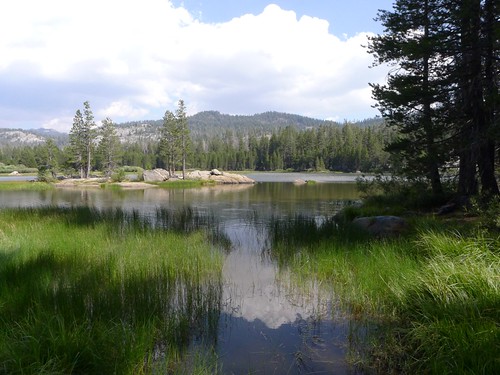 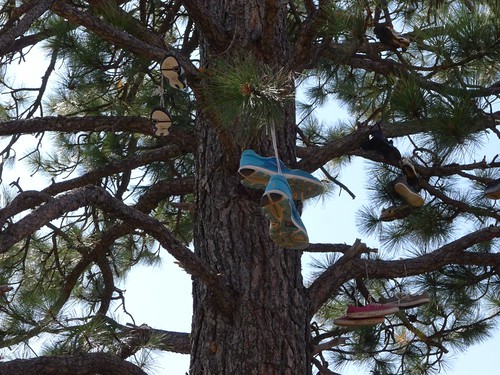 Driving west of Pinecrest and the Lair of the Golden Bear on California Route 108, you will find the shoe tree. I don’t know why people have thrown dozens of adult-size sports shoe pairs around the branches of this large pine tree on a mountain highway far from any town… but there it is. 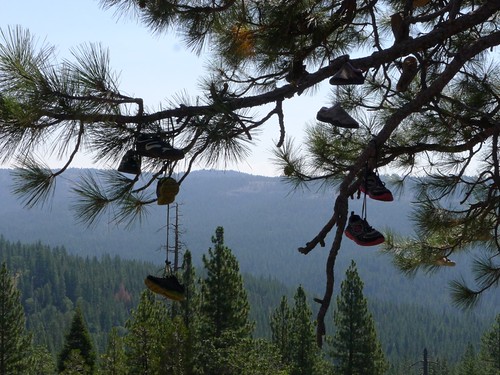 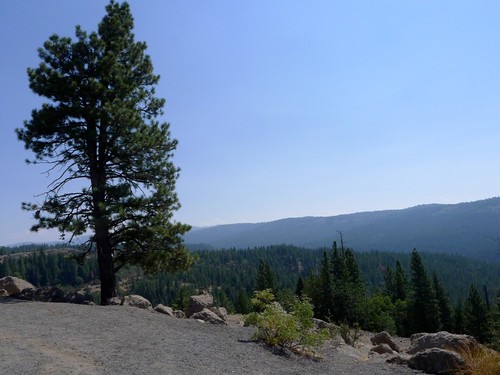