In Memory of Danny Cohen

I was very sorry to learn of the passing of Internet Pioneer Danny Cohen this week (1937-2019). Danny and I worked together at Sun Microsystems Labs in Menlo Park, California. These pictures are from a talk Danny gave in 2009 about VOIP and the start of the internet, from just 4 sites in 1969 to 45 sites in 1974.

Danny and I worked together on several projects:

My husband, John Plocher, and Danny and I attended Edward Tufte’s class on “Presenting Data and Information” together in 2008. In 2010 as Sun Labs was transitioning to Oracle, I took the pictures below of Danny’s office. 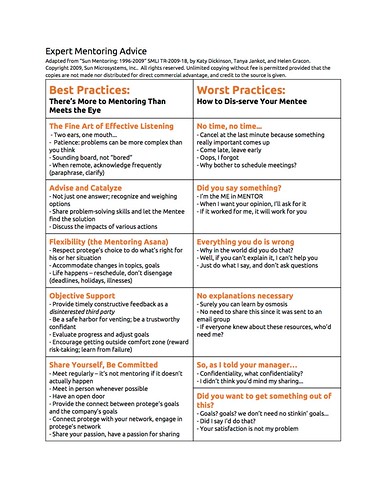 I think this has been the single most popular 1-page mentoring summary I ever published:

“Best Practices / Worst Practices” may have been published in other places as well – please tell me if you see it!
12/27/2014: another reference published by talentmanagement360.com.

To get “Mentoring in a Box” free:

9/16/2015 update: Several of the documents in “Mentoring in a Box” have been updated and are available by Mentoring Standard.

“Expert Mentoring Advice: Best Practices / Worst Practices” is adapted from “Sun Mentoring: 1996-2009” SMLI TR-2009-18, by Katy Dickinson, Tanya Jankot, and Helen Gracon. Copyright 2009, Sun Microsystems, Inc.. All rights reserved. Unlimited copying without fee is permitted provided that the copies are not made nor distributed for direct commercial advantage, and credit to the source is given.

In preparing to go to the American Association of University Women (AAUW) national convention in New Orleans, Louisiana, next week, I have made three mentoring resources available for easy and free download:

19 October 2019: Links updated. The conference book version of Triangular Partnership: the Power of the Diaspora is available for free download. For more about MentorCloud business practices, see Collecting a Labor Judgement (15 January 2016).

Building a Community Through Mentoring

In my Katysblog entry yesterday “Sheryl Sandberg, Leaning In on Mentoring“, I included a quote from Ms. Sandberg’s March 2013 book Lean In: Women, Work, and the Will to Lead:

Many companies are starting to move from informal mentoring that relies on individual initiative to more formal programs. When taken seriously, these formal mentorship/sponsorship programs can be remarkably successful.

One of the sometimes-unexpected successes of formal mentoring programs is the development of a strong long-term community of mentors and mentees who have come to know and respect each other through the program.  These communities can continue far beyond the boundaries of the company or program that created them.

The worlds of STEM and the Silicon Valley in particular are small places.  Even though there are over seven million people in the San Francisco Bay Area, after a few years working here, it becomes hard to to go anywhere without meeting folks you know.  Professional trust and connections, such as those built and supported by formal mentoring programs, enhance both reputation and effectiveness.

“Triangular Partnership” is a term used by People to People to describe the relationship of three global groups:

How does professional mentoring interact with this Triangular Partnership, and with the global diaspora in particular?

Here are three successful professional mentoring programs in which the global diaspora takes a key role:

These examples have shown two legs of the triangle – Diaspora and Western Institutions – using mentoring for community building, mutual-understanding, and professional growth. To see mentoring connections with the triangle’s third leg – Developing Countries Institutions – check out the customer logos on the MentorCloud home page, including:

Filed under Mentoring & Other Business

MentorCloud has been asked to contribute a chapter to a book being edited by one of our customers. As I did when writing “Sun Mentoring: 1996-2009“, I am putting together chapter section drafts piece by piece, published in this blog and on the MentorCloud blog as they are developed. (By the way, Oracle is no longer distributing the Sun Microsystems Labs Technical Report: “Sun Mentoring: 1996-2009″  by Katy Dickinson, Tanya Jankot and Helen Gracon, but it is still available for free download on our family website and is also available for purchase from the ACM Digital Library.)  Here are the eight essays I have published so far:

Huawei is hosting the 3-day IEEE Hot Interconnects conference in Santa Clara, California, this week and I am pleased to be the official event photographer. Yesterday was the first day of this 20th anniversary conference. It has been fun to see so many colleagues and friends from the Sun Labs diaspora, including Radia Perlman (called “The Mother of the Internet”, first woman to be a Sun Microsystems Fellow, many-time mentor in my SEED program, holder of more than 200 granted US patents, now an Intel Fellow). She gave a fascinating talk called “Network Myths and Mysteries.”

I am taking pictures again today – and posting them on the new IEEE Hot Interconnects Pinterest page.